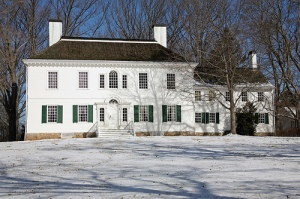 Widow Theodosia Johnes Ford opened her home and grounds in Morristown to General George Washington, which he used as his headquarters from December 1779 to June 1780. Ford was bequeathed the mansion, along with furniture, cattle and a horse, after her husband’s death in 1777.

The home accommodated Rodney’s Light Infantry troops during their encampment at Morristown. General Washington occupied Ford’s home as he and his entourage waited out a severe snowstorm. Martha Washington arrived a few days later, and the Ford family welcomed the General and his wife into their gracious home for a more long-term stay.

The Ford Mansion was eventually named an historic site and is currently operated by the National Park Service. Ford has long been recognized for her contribution to New Jersey, a state hit hard by the Revolutionary struggle.